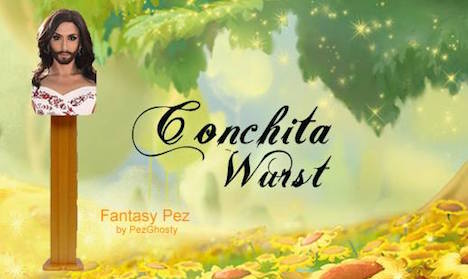 Pez is a tasty candy that was invented in Austria in 1927, making it 87 years old.  For the past fifty of those years, Pez has released hundreds of variants of its patented dispenser, making it a barometer of pop culture.

The dispenser, originally invented to mimic a cigarette lighter, has evolved into a cultural phenomenon, with collectors trading rare versions such as original Mickey Mouse heads for several thousand dollars.  Early Pez dispensers didn't use a character head, which were introduced in the USA in 1955.  The most popular heads were characters from the Star Wars movies.

PEZ is manufactured in Traun in Upper Austria, as well as Orange, CT in the USA, where more than three billion candy bricks are sold each year.  The dispensers are made in Hungary and China.

Each year, hundreds of Pez collectors meet at several conventions around the world, to trade dispensers and share their love for their favourite candy.