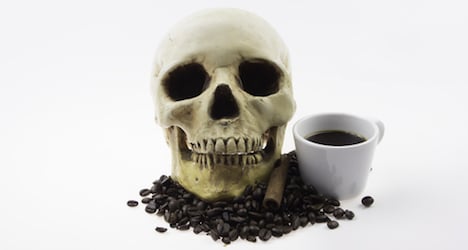 Photo: Shutterstock
Already boasting the world's first Funeral Museum, ghoulish tours around famous grave sites, and a host of morbid songs about dying, Vienna may appear to have a healthy relationship with death.
But how well do the Viennese face up to the reality of death and talk about what it really means to them? Not well enough, according to two women who earlier this year set up the Vienna Death Cafe in a bid to encourage more thoughtfulness about the subject.
Part of a global movement of Death Cafes, the Vienna Death Cafe group meet up every five to six weeks to sit down with coffee and cake and talk about a subject that for so many is tied up with taboo and negativity. Through open, frank, and thoughtful discussion the group hope that these assumptions about death can be overcome and people can think about the topic in a way that helps them live more fulfilled lives.
“Death can change everything, and it can often be a shock,” explains Aurelia Burckhardt, who was one of the founders of the Vienna Death Cafe and who I met at the group's latest meeting in early December. “It can be traumatic if you suddenly lose someone or receive a bad medical diagnosis. That is why we have to find places to talk about it but there are not many platforms to do so. I think [the Death Cafe] is one of the first places to democratically talk about it.” Several people attended the death klatch in December.  Photo: Maddy French
The Death Cafe movement started in 2010 in the living room of Londoner Jon Underwood, who was inspired by the Swiss “Cafe Mortal” project founded by Swiss sociologist Bernard Crettaz more than ten years ago. Now there are hundreds of Death Cafes around the world and Underwood is even considering opening up a permanent location in London.
In Vienna, the Death Cafe has been running for nearly a year. The December meeting took place in a cosy cafe and vintage clothing store where a group of about seven gathered near a wood burning stove and discussed their experiences of death and what it meant to them.
The motivations for wanting to join a Death Cafe vary but for many it seemed that personal experiences of death or having faced questions about their own mortality had brought them here. But while this may seem a touch morbid, the discussion tended to be positive and inspiring and often came round to the subject of life. “One time, we even spent the whole session talking about birth,” explains Gabriele Jost, the co-founder and host of the group who helps to guide the discussion along during the meetings.
“For me it would be great if one day everyone could talk about death as we do about birth,” she says later, adding that expressing pain and loss is often associated with weakness in Western society and it is important to think of it in more complex terms. “The way we think about death is very influenced by media and a certain cultural and philosophical view,” she adds.
Society's inclination to predominantly associate death with sadness is something Aurelia noticed when she started telling people about the group. “When I first mentioned to people the Death Cafe, they said it sounded sad but it is actually fun. It is interesting that we only connect sadness to death but actually that is just one side of it,” she says. “To look at death can be so positive and you feel really strong feelings of being connected to other people when they share their stories, particularly those of survival.”
Throughout the evening the group exchanged stories and thoughts with the strangers next to them about culture and healthcare through to personal loss and bereavement, offering an alternative to the more typical Viennese approach to death, who according to Aurelia tend to make a “song and dance about it”.
“The Viennese normally don't want to talk about death so directly but they sing or make a theatre piece about it,” she says. “They have to have it in a certain manner. But actually this brings more morbidity to the subject because it brings more mystery. People want to see more positive sides to it.”
“When we first started I thought that people here did not want to talk about this subject. But I have found that is actually not true. We have so many people coming, not just our friends but strangers who want to talk about it.”
New members are welcome to join the meetings, which take place over a couple of hours one evening where people are invited to come and go as they please. The main language is German, but Aurelia and Gabriele also speak English, French and Italian and are happy to translate.
To find out the date and location of the next meeting in late January contact the Vienna Death Cafe either through http://deathcafe.com/deathcafe/319/ or http://deathcafevienna.mixxt.at/.