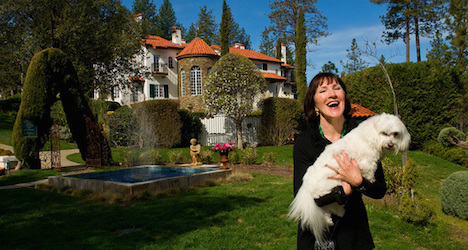 During my travels as a journalist, I come across quite a few memorable hotels. One I found recently just outside famed Yosemite National Park, in the little and delightfully provincial village of Oakhurst, California. The hotel – or better, the castle — is named Chateau du Sureau, and is run by Austrian-born chef and interior designer Erna Kubin-Clanin.

It's easy to see why this luxury hotel is such a favorite. Despite many detours and stumbling blocks, Kubin-Clanin has created an estate of exceptional class a mere 16 miles away from the south entrance of Yosemite National Park.

The estate features an award-winning restaurant, Erna's Elderberry House, and a 9,000-square-foot stucco inn complete with a stone turret, Parisian balconies and shuttered windows. The Chateau du Sureau, named after the elderberry bushes on the property, is filled with original European antiques that Kubin-Clanin and her husband, Rene, collected during their travels.

This 5-star hotel attracts Hollywood stars, Silicon Valley tycoons and globetrotters, who may have been as surprised as I was to find such a jewel on this laid-back country site. Barbra Streisand, Robert De Niro and Brooke Shields all stayed at the Chateau and obviously appreciated the upscale European ambience, the discrete luxury and the unique ability of the lady of the house to resurrect the world of the early 20th century, when there were no TVs in the room and the bill arrived as a handwritten note. A custom still cherished at Chateau du Sureau.

Even Sir Anthony Hopkins prepared for some of his movies in the ultra secluded Jugendstil villa (furnished with classical European furniture designed in the famous style of the period between 1890 and 1905) behind the castle and dined in Erna´s Elderberry restaurant in the evenings. Conde Nast Traveler also declared the Chateau du Sureau — a member of the famous Relais & Chateaux organization since 1993 — the best hotel in the state of California multiple times since it first opened its wrought iron gates emblazoned with the castle's crest over 20 years ago.

Now you may be wondering, as I did after my arrival: How could a woman from Vienna, Austria, who had no financial backing and marketing to speak of, create such an estate in the first place? Kubin-Clanin and her husband, Rene, met with me in the grand salon to answer my questions.

You were born during World War II and grew up in war-torn Vienna. What brought you to the U.S.?

Erna Kubin-Clanin: I was studying in Vienna at the Academy for Fine Arts, when I received a scholarship for the New York University fine arts department. I arrived in January 1962 on a grey, bitter cold winter morning onboard the TS Bremen in New York's harbor. To earn money, I worked as an au pair girl, but unfortunately, the family placed so many demands on me that I had no time left for my studies. So I lost that opportunity.

For personal reasons, I could not return to Austria at that time. So I sold my fur coat, the only thing valuable in my possession, to at least be able to travel by bus from New York to Los Angeles and follow a friend who had moved there. In LA, I met my first husband. Together we built up a Greek restaurant, even though I always hated cooking and never thought about becoming a chef.

Then how did you get from a metropolis like Los Angeles to the still quite provincial Oakhurst in Northern California?

My husband had a gambling addiction and we lost everything we had built up. After the divorce, I left Los Angeles. My daughters Pamela and Renee-Nicole were still little and I knew no better way to keep earning money than in the hospitality industry. Friends of mine wanted to build a hotel near Yosemite and asked me if I would follow them. So I arrived here with my children and $100 in my purse at the end of the 70s. At that time, my mother Maria had moved from Austria to help me with my girls, and somehow we managed to get back on our feet.

For seven years I cooked in a little village inside the national park, in a restaurant called The Redwood Inn. I furnished the place with my own European furniture from my former house in L.A. and served Tafelspitz (boiled beef) and apple strudel. These were dishes from my home country that I had perfected with my mother's help. The unusual ambience and the classic European kitchen soon became well known, and the restaurant was a hit with tourists.

But it was hard work and during the high season in summer, I frequently worked from 6 o'clock in the morning until 1 o'clock at night to be able to save money and eventually buy a bit of land outside the park in Oakhurst. I purchased the current Elderberry Estate, named after the many elderberry bushes that grow here, and opened my own restaurant, Erna´s Elderberry House, in 1984.

Within a couple of years your restaurant drew the attention of a famous New York Times food critic. How did that come about?

Food critic Craig Claiborne really put me on the map and I had no idea who he was when he came into my restaurant. It was only after dinner that he approached me and introduced himself. He ended up extending his visit for three more days, and we mainly spent those days in the kitchen cooking together. His review of Erna's Elderberry restaurant in the New York Times opened the doors to a whole new clientele who otherwise might never have heard about us. I learned many lessons in my life, one of which was, that hard work and perseverance will be rewarded in rather unsuspecting ways!

I understand that when you became a top chef, you wanted to expand. But building yourself a castle, isn't that a bit much?

I did this for business survival. My restaurant attracted an upscale clientele from cities like Fresno, San Francisco and LA, but there wasn't really an acceptable first class hotel within 1.5 hours, only cheap rooms and motels. I had to offer my guests lodging, and so the idea was born to build a luxury hotel with 10 rooms. The Chateau du Sureau opened in May 1991. Later, we added the private villa and the spa.

I designed and helped build every building on the estate. My husband, Rene, is the technical soul of the estate and painstakingly and patiently restored many of the antiques, light fixtures and iron gates over thousands of hours. Quality and authenticity are our top priorities. Our estate offers guests the flair of Europe without having to board an airplane.

You mastered the challenges that immigrants often face with style and finesse and have proven that you have extreme perseverance. Where do these character traits come from?

I was born during the second World War and my mother worked as a housekeeper to take care of us. I was a single child and grew up without a father. As a 5-year-old, I entered the monastery boarding school and was educated there until matriculation. Every morning we received an hour-long lesson in manners. We learned how to beautifully set a table, how to decorate for Easter or Christmas, and how to design our environment stylishly – skills that have benefited me my whole life.

My childhood during the years after the war also taught me how to do whatever needs to be done in order to survive, to persevere and to always give your best. I am also a hopeless romantic and dreamer and believe in the positives in life. As a child, amidst the rubble of Vienna after the war, I longed for peace and beauty. My husband, Rene, has always said that with the castle, I have created the world that I could only dream of as a child.

The author of this article, Bettina Gordon, is an Austrian who currently lives in Washington, DC. To reach Bettina please check out her website BettinaGordon.com or connect with her through facebook facebook.com/bettina.gordon

TRAIN TRAVEL
Yes, train travel across Europe is far better than flying – even with kids
Url copied to clipboard!