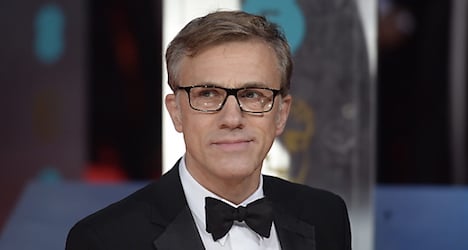 The Pulp Fiction director, whose decision to cast Waltz in 2009's Inglourious Basterds helped the Vienna-born star win the first of his two best supporting actor Oscars, called him "my favourite Austrian".

"On one hand he's a master thespian… on the other hand he's also a tool box actor. He just gets around to getting the job done in a very unadorned way," he said at a Hollywood Boulevard star-unveiling ceremony.

"This can't help but… make his heart swell with pride, even though he might not admit it… and tickle his funny bone at the same time."

Waltz – whose new movie Horrible Bosses 2 came out this weekend — dismissed Tarantino's suggestion that as a stage-trained actor he didn't take the Hollywood star honour too seriously.

"My heart is not just a little bit throbbing with pride, it's bursting," he said, adding: "I, as a guy from Vienna, would not even have dreamt about (this) in my wildest dreams," he said.

Tarantino, who also cast Waltz in 2012's Django Unchained, leading to another Oscar for the actor, insisted that the Austrian is different from the typical Hollywood A-lister.

"Christoph chortles at the Hollywood actors with their assistants, with their miso soup, and their lemon with tea, waiting just off screen for them," he said, describing a stereotypical tantrum-prone star.

"When people complain about the (crew member) in their eyeline, Christoph is the first person to say well 'I've done theatre, there's hundreds of people in my eyeline, dear boy, you're fine'."

Waltz also co-stars with Amy Adams in Big Eyes the Tim Burton-directed biopic of husband-and-wife artists Walter and Margaret Keane, due for release in the US on December 25th.