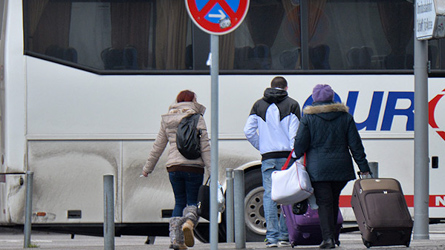 The prolonged economic downturn has tarnished the EU's allure among those looking to improve their lives, the study finds.

“Countries would benefit more from immigration if they consider migrants as a resource rather than a problem, and integration policies as an investment,” said OECD Secretary-General Angel Gurria, launching the report in Paris.

65,000 migrants settled in Austria last year, which corresponds to a decrease of three percent compared to 2012, but an increase of 37 percent since 2007. 78 percent of people who migrated to Austria last year were from the EU.

With eight immigrants to every 1000 inhabitants, Austria is somewhat higher than the OECD average but significantly lower than Switzerland (16), Norway (12) and Australia (11).

Last year Switzerland recorded permanent immigration of 136,200 people, three-quarters of whom were EU citizens. Swiss citizens have just rejected a call for dramatic immigration cuts, amid charges the initiative was xenophobic and a threat to Switzerland's economy.

OECD expert Thomas Liebig said that Austria’s high proportion of EU immigrants were well integrated. 60 percent of people who migrated to Austria in the past five years were employed, and 31 percent were highly qualified.

However, he said that there was still a lot of untapped potential, as almost half were underemployed in relation to their qualifications.

Liebig added that children born in Austria to immigrant parents encountered problems as only 25 percent can read and write German to a good level. However, adolescents who were born abroad and later migrated to Austria tended to do better and were well integrated.

In absolute terms, Germany is the biggest magnet in Europe for immigrants. During 2013, migration to Germany recorded a double-digit increase to over 450,000 people, its fourth consecutive annual rise. Three-quarters of all immigrants received by Germany are from other EU countries, making the country the second destination in the OECD, after the United States.

Overall the largest source country for immigrants was China, with nearly ten percent of all immigrants, followed by Romania (5.6 percent) and Poland (5.4 percent).

The number of asylum seekers in the OECD area rose by 20 percent, with most coming from Syria. Per capita, the largest host country for refugees was Sweden.

The percentage of foreign students at Austrian universities has increased by 9.4 percent compared to 2012 – with 58,019 foreign students, placing Austria alongside Luxembourg, Australia, Great Britain, Switzerland and New Zealand when it comes to higher education.

“The short and long-term costs of standing still in the face of rapidly changing needs are high. Policy makers need to lead an open and informed debate to build confidence and ensure everyone benefits,” he added.