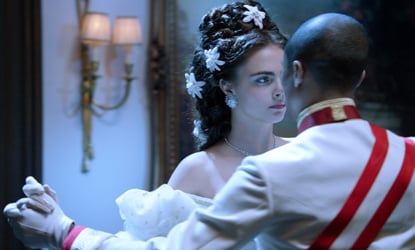 Williams composed an original track for the film – CC the World – and sings it with Delevingne.

The short film was released on December 1st.  Photo: Youtube/Lagerfeld

While visiting an Austrian resort in 1954, the designer (played by Geraldine Chaplin) is inspired by a jacket worn by the hotel’s elevator operator, portrayed by Williams.

That style, with contrasting trim and pockets, would go on to become the famous Chanel jacket.

In an extended dream sequence, Pharrell is reincarnated as Franz Joseph I while Delevingne plays Sisi.

“It’s not meant to be a historical reconstruction or something heavy like that. This is light and funny,” Lagerfeld said in an interview with WWD in Paris last week. He added that he sent the Happy singer “all kinds of Viennese music” to get him into the spirit of the project.

The period set, designed to look like an Austrian hunting lodge with its decorative antlers, was constructed in Luc Besson’s Paris studios, with a cast of more than 60 extras.

The short film will be released on December 1st, a day ahead of the Paris-Salzburg fashion show at the Schloss Leopoldskron. 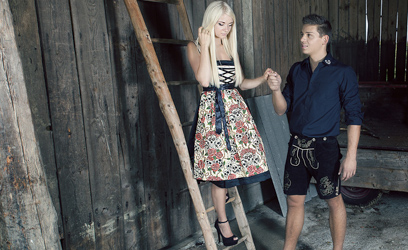 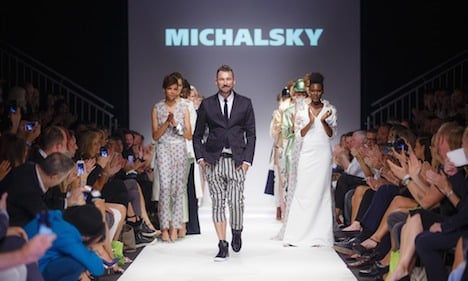 "The fashion week in Vienna is one of the only fashion events that carries so much importance for the designers, fashion lovers and for the fashion scene in itself" one of Austria's top designers, Claus Tyler, told The Local during our chat with him at this year's fashion week.

The Austrian fashion fans who attended the shows throughout the week showed great enthusiasm for 'native' designers this year with the likes of Elfenkleid, Anelia Peschev, Michel Mayer, Susanne Bisovsky, Kayiko and Sabine Karner, amongst many others.

Fashion week opened with German designer Michael Michalsky, who has been at the forefront of the German fashion scene for years with his labels "studio Michalsky" for menswear and "Michalsky" for women's fashion.

The former Adidas designer is known for laying out the mantra "Real Clothes for Real people" in his creations. This year he has added the theme "important secrets" to his newest collection, with which he hopes to shed light onto the importance of personal privacy and data protection.

The recent public debates about surveillance, internet spying and the NSA scandal were reflected onto his designs by the fabric and materials he used. They included shiny metallic leather, mesh, and especially the netted fabric which had strong symbolism for the World Wide Web transparency. He had plenty of white or cream colours which could represent the colour of innocence.

Another well-liked designer this week was Nikola Fechter,  whose show was attended by local stars like actress Nina Proll, who was sitting in the front row. The show was filled with ready to wear mini-dresses that hug the curves of the body, loose fitting blouses, and tight pants, all of which were strictly combined with high heels.

Designer Tiberius, who is probably one of Vienna’s most well-liked designers, was one of the main highlights this week. The leather specialist shared similar fashion statements for both women and men; a lot of leather trousers, leather shirts and leather skirts were presented on the runway worn by models of both genders, the skirts especially tailored for men were worn just above knee level tailored into an A-line.

The highlight of the show was probably when designer Marcos Valenzuela presented himself on the runway wearing his own leather skirt, bringing his fans onto their feet into a full standing ovation.

Another designer label whose name is known to often flow across Viennese fashion-conscious lips is Calisti. Front row guests at the Calisti show included Austrian stars Irene Mayer with her partner, and Austria’s well known rapper Nazar. The models were presented wearing leather overalls, punctured leather shirts, shorts and breezy dresses that were being held in place by leather harnesses at the waist. Another standing ovation showered with applause was given to label designer Martina Müller as she came walking out into the runway with arms held high in appreciation of her fans.

It wasn’t just leather that got all the attention this year. Designer Susane Bikovsky presented her latest creations with models wearing top-hats over turbans, skintight dresses that gave off a Victorian meets early 20th century vibe, bobbing skirts and tastefully tailored layers.

What seemed to have surprised and delighted most guests was when the models came out in long thigh-high Latex-overknee boots, with bright embroidered patterns painted onto them. Followed up by a finely embroidered completely sheer negligee, which caused a whirl of snapshots and amused "aahs" by the female fans in the audience.

The winners of the Fashion Awards this year, Inga Nemirovskaia and Rani Bageria were presented on Thursday, and got to show off their designs on the runway in a new concept for the fashion week.

Afterwards there was a free show for anyone wanting to attend the last few moments of the fashion week, which caused spontaneous crowding under the tent in the crowds’ effort to get away from the rain. The many celebrities who attended Fashion Week this year shows heightened interest for Austria’s fashion scene and its future.

Just a few years ago the fashion week was filled with nothing but fame-seeking fashion bloggers and fashion magazine readers. Austria seems to be making a name for itself in the fashion scene as it grows bigger and more dazzling each year. 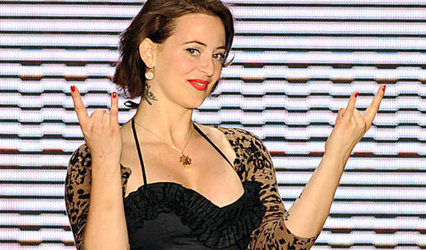