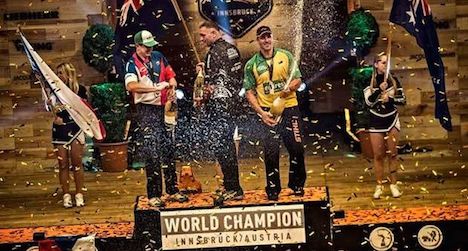 Wynyard has dominated the sport for the last several years, and won confidently with personal bests of axe and saw.  There were twelve athletes from as many countries, with Austrian Armin Kugler placing eleventh.

In the team version of the sport which was decided on Friday, Australia earned gold ahead of Canada and the United States.

Timber sports as a competitive discipline dates back to 1870, with the first woodchopping world cup held in Tasmania in 1891.

Modern exponents of the sport use the traditional axe and saw, but also show their skills with a chainsaw.

According to fans of the sport, it's all about how you use the axe, and how you handle the wood.  A combination of speed, strength and endurance is required, but also a deep understanding of how to cut wood.

Wynyard has won more than 110 world titles in his career.