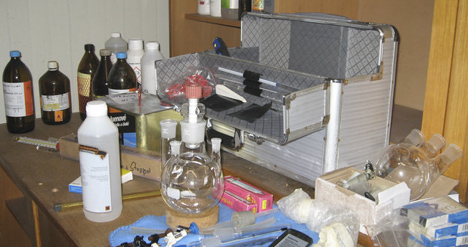 Police said they found “a large amount” of equipment for producing the drug, but no stash of the addictive drug itself.

The man, whose name was reported to be Peter K., is a former professional poker player.  He is reported to have made a ‘Breaking Bad’ style home laboratory in the kitchen of an apartment in Judengasse – just a stone's throw from the famous St Stephan's Cathedral.

Police spokesman Thomas Keiblinger said that the man was also living there and disposed of the hazardous waste left over from making the drug in the shared household bins.

Keiblinger told The Local that the man’s case had now been referred to the state prosecutor but that he is part of a larger case involving a bigger network which police have been investigating since 2013.

The man is believed to have made the crystal meth for his own personal use.

A police search of the apartment lasted eight hours and also involved members of the fire brigade as the chemicals used to make crystal meth can auto-ignite. Hazardous vapours are also associated with meth labs.

Police would not comment on further charges which may be pending until they complete their investigations.