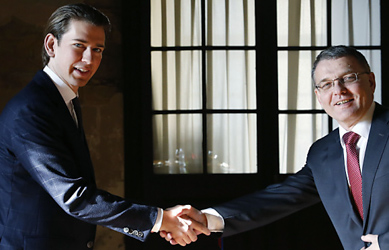 Austria supports green energy and has no nuclear power stations. It has said it will use all political and legal means to block the Czech project.

"We have no reason to prevent our foreign counterparts from having access to the information, there is nothing secret," Czech Foreign Minister Lubomir Zaoralek said after meeting his Austrian counterpart Sebastian Kurz on Tuesday.

Kurz said that he appreciated this but noted that Austria still had many doubts.

"We are ready to use all the opportunities of talks as well as all legal processes in connection with the repository," Kurz said.

The Czech Environment Ministry announced in October that it has green-lit geological research at seven locations and will assess their suitability for the construction of a deep repository for the disposal of radioactive waste.

The construction of the nuclear waste repository – to be operational by 2065 – will take 15 years.

At present, the spent fuel from the country's six nuclear units (four in the Dukovany and two in the Temelin nuclear power plant) is stored in interim repositories.

"We are only at the beginning of the process when the localities are being selected. The decision is planned to be made in 2025 and the operation itself much later," Zaoralek said.

"There is enough time to examine the sites and there is the general question of whether any of them will be suitable," he added.

He said in the first stage the regional governors of Upper and Lower Austria would be invited to negotiations.

"They can negotiate with the State Nuclear Safety Authority and similar institutions that inform them about our steps, and the criteria that must be fulfilled," he said.