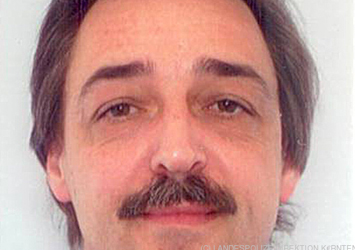 The suspect is thought to be armed and dangerous. Photo: APA/LANDESPOLIZEIDIREKTION KÄRNTEN

Police have said the 50-year-old suspect is armed and dangerous. He shot the victim, believed to have been a love rival, as he sat in the driver seat of his BMW. The dead man’s girlfriend was allegedly a witness, according to a report in the Kronen Zeitung.

The victim died after being shot in the head and by the time a doctor arrived on the scene it was too late to save him.

Police spokesman Rainer Dionisio said the fugitive may have stolen a white Suzuki Splash car with a Klagenfurt number plate.

"The police investigation is focused on the districts of Klagenfurt Land, Feldkirchen and the city of Klagenfurt," Dionisio said.

Police are asking anyone with relevant information to contact them.

The body was found in a black BMW X3, in the castle car park. Police believe the victim was shot at around 3.20pm and that at least two shots were fired.

Witnesses called emergency services. The suspect’s house in Feldkirchen was immediately searched by armed police and his car – a silver BMW X3 in which he fled the crime scene – was found in Moosburg.

Despite a large scale search, which included the use of a police helicopter, the 50-year-old remains on the loose.