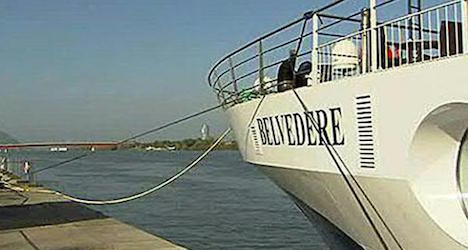 The 43-year-old Hungarian sailor was killed during a landing manoeuvre of the passenger ship MS Belvedere.  His crew mates witnessed the incident, and immediately began a rescue.

Despite resuscitation attempts, the man died at the scene, according to police spokesman Thomas Keiblinger.

The accident occurred around 2am, while nearing another ship that was anchored at the pier.  A colleague noticed the man falling into the water, and immediately raised the alarm.

Sailors launched a dinghy into the water, and caught up with the man after he had floated 20 metres from the ship.

When police arrived, colleagues of the sailor were attempting resuscitation, but were unsuccessful.  According to Keiblinger, his colleagues were in shock, and were not questioned at the time.  He said "there is no evidence of foul play".
An autopsy has been ordered, as the cause of death is not yet confirmed.