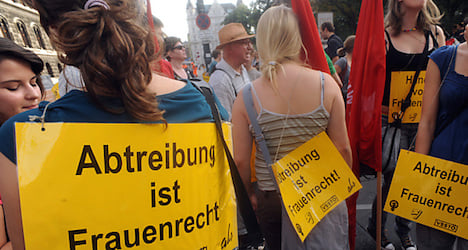 Abortion is no longer taboo in Austria. Photo: APA (Pfarrhofer)

41 percent also believe that modern sex education should start from the age of ten. These are the results of the current Woman's Barometer survey, which were presented in Vienna on Friday.

"The approval of the possibility of obtaining an abortion in the public hospitals of all provinces makes me especially pleased.  If women are already in a difficult situation anyway, there is no need to put additional obstacles in their way by forcing them to make long journeys to a hospital which can care for them," said Women's Minister Gabriele Heinisch-Hosek of Austria's ruling Social Democratic party (SPÖ).
"It is interesting that a lower proportion of younger respondents support this possibility. This is probably because persons under 30 years old have less experience with the subject," said Christina Matzka of the survey institute meinungsraum.at.
A majority of respondents also spoke out for an earlier provision of sex education. Twelve percent want it to begin in kindergarten, while one third want it from primary school level and 41 percent no later than the age of ten.
There are divided views among Austrians as regards where sex education should take place.  47 percent want it to be given in educational institutions while 51 percent favour the idea that it should be given at home.
"Sex education can not begin early enough in my opinion," said Heinisch-Hosek. While she would favour a passive approach for the nursery – "Educators must be able to respond in any case to children's questions" – she believes that sex education should already be a core component of the curriculum in elementary schools.
Therefore, the Women's and Education Minister would like to have in the foreseeable future a redesign and adoption of earlier sex education in the syllabus, which has not changed since the 1990s.
Also two out of three Austrians know about the new breast cancer screening program – with 67 percent of them feeling very well or rather well informed.  60 percent of respondents are aware of the offer of a free vaccination against cervical cancer for girls and boys aged between nine and 12 years.
In order to promote body awareness and self-confidence among women, 82 percent of Austrians want mandatory labelling for retouched advertising photos. 77 percent support the idea that mannequins have to represent the human body more realistically, while 87 per cent of respondents were in favour of a lower limit for the body weight of models.
The Women's Barometer is an online survey on equality in Austria. It is conducted quarterly among 1,000 men and women aged from 15 to 69 years.