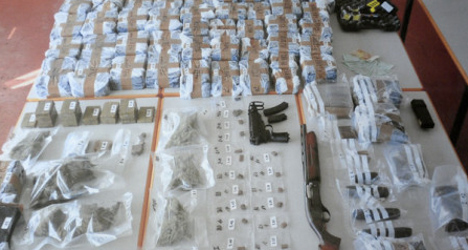 After raids in Vienna police found several weapons, including a shotgun, and almost 100 kg of cannabis with a street value of around €1 million.

Several suspects were arrested in Vienna, including a disabled woman who reportedly sold drugs from her bed.

The drugs ring was also operating in Spain and France and had been under police observation since last year.

Back in November 2013 police arrested nine people on suspicion of smuggling narcotic drugs, who were later imprisoned. At that time 47 kg of cannabis was seized.

However, detective Gerhard Winkler said at a press conference on Thursday that the gang reorganized itself after the arrests and remained active. Police resumed their investigation in March. They found that drugs were being brought in from Morocco via Spain and then distributed across Europe.

The Austrian gang was selling hashish and marijuana, and police believe some of their supplies were coming in via the Netherlands.

Police carried out 11 raids on September 11th and seized the biggest haul of cannabis they had seen this year, as well as a pump-action shotgun, an automatic pistol and a taser. Eight suspects were arrested and five remanded in custody.

The prime Austrian suspect is a 49-year-old man who Winkler described as “Austria’s second managing director” – having stepped into the shoes of the ringleader who was arrested last year. He had been under police observation for some time.

Four suspects are believed to have been distributing the drugs in Vienna and include three men aged 56, 51, and 22 and a 32-year-old woman.

The drugs were being stored at an apartment in Sonnenweg, Penzing.

Investigators said that one of the dealers was a woman in her 50s who lived in Währing, weighed 140 kg, and was bedridden.

She is believed to have sold the drugs from her bed, giving her customers the code to her apartment door.

She kept the cannabis by her bed in freezer bags, next to her medication. The Österreich paper reports that she financed her medical care with the money she got from selling drugs.

Winkler said that investigations are still ongoing and police are looking into why the gang needed weapons. It’s unclear where the guns came from, and their serial numbers had been removed.

So far the suspects have remained silent and refused to cooperate with the police.