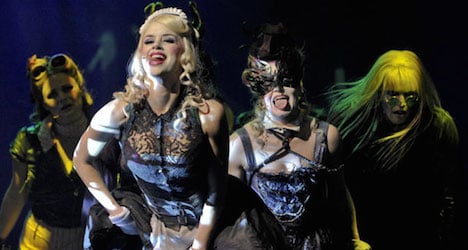 The Rocky Horror Show by British-New Zealand writer Richard O'Brien is touring German-speaking countries, and from November 19 to December 14 will be in production at Vienna's Museumsquartier.

O'Brien — who played the role of Riff Raff in the original version as well in the film version — was inspired by rock'n'roll, B-movies and his open bisexuality, to create what has been described by one critic as 'one hundred minutes of pure queer celebration that manages to concoct a bizarre cocktail of sincerity and reckless abandon.'

Together with the composer Richard Hartley he worked on the first version, which premiered on June 19, 1973 at the Theatre Upstairs, part of London's Royal Court Theatre.

"We had no money, so we could rehearse only two and a half weeks. We only had the band one day, on a Saturday," the now 70-year-old Hartley looked back.

The role of Frank N. Furter is played and sung in the current version by British actor and musical performer Rob Fowler.

"This is such a strong character, it takes an actor with a great voice," said Christopher Biggins, who was also active as a participant in the legendary film.

With a score of 86 percent on Rotten Tomatoes, the film is a perennial classic – but can't compete with the theatrical version, where the full power of the interactive nature of the musical is best unleashed.

The Local will leave some of the audience participation as a pleasant surprise for newcomers, but suffice it to say, it's an unforgettable experience.

"Nowhere is there an audience like at the Rocky Horror performances," said Biggins. "Since all the fat women come in corsets and middle-aged men in swimsuits, in the 'Rocky Horror Show' people are driven by their imagination. I don't think people go to the theater to see 'Miss Saigon' in kimonos. "

Hint: these days, the audience is asked not to bring rice for the wedding scene.  Instead, confetti is used, so as not to attract mice.
Tickets for the Rocky Horror Show in the Museum Quarter are available here.