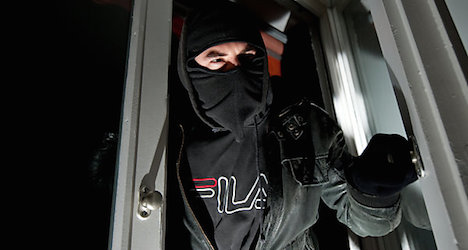 There are at least two burglaries every hour in Austria.  From these, around half of opportunistic offenders could be deferred by simple preventive measures.

A survey conducted by the KFV shows that only 41 percent of Austrians take basic safety measures, despite burglaries having increased by 76 percent in the past few years.

Almost half of the 500 respondents claimed that there would be nothing of value lost if they were burglarized anyway, showing an uncomfortable degree of apathy on the question.

Despite this, the average loss from a burglary in Austria was around €2,200.  60 percent of Austrians gloomily explain that they can't protect themselves anyway.

The Vice President of the Insurance Association Hartwig Löger outlined that in many cases, even basic steps are effective at deterring offenders, including locking doors and closing windows when leaving the house.

Equally effective as a deterrent are attentive neighbours, and the regular trimming of hedges, to ensure that the house is clearly visible from the street.

It's generally known that criminals will often quickly evaluate the obstacles of a series of possible targets in a short time.  The more barriers to entry that exist, the smaller the chance of a break-in, according to Löger.  Around one third of intrusion attempts are abandoned at the outset, he said.

In 2013, there were 16,548 burglaries recorded by police.  These numbers rise in winter months, as the twilight makes it for burglars to avoid detection.

The most effective deterrent is a functioning alarm system, said Löger, but only if it is turned on and all entry points are sealed.

Causes for the increase of domestic burglary

Without access to the dark figures and a very low clear-up rate of 7% it is hard to find convincing arguments for the increasing crime rates in this field.

Austria in turn became a target for offenders operating in large geographical areas. The increase of mobility in south-eastern neighbouring countries also led to an increase of domestic burglary in Austria.

On the level of subjects psychologists argued that the production of needs for self-realisation and increasing economic pressure foster illegal activities.

There are some indicators (value of stolen goods and overall damage per case) that suggest an increasing level of professionalization among burglars.