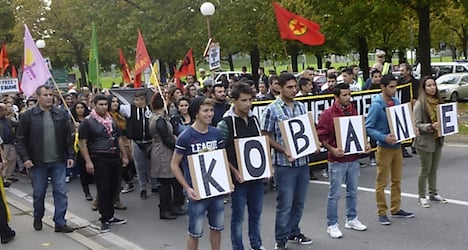 The arrests were announced by Police on Thursday, and follow investigations into the incident where two teens were seriously injured.

Despite a lack of confessions from the two main suspects, police announced on Friday at a press conference that they have decisive evidence.

The protest march being held to support the Kurds under siege in the town of Kobane in Syria was beset by violence.

In one case, a 17-year-old from Thailand was attacked by a 25-year-old Turkish citizen from Dornbirn.

In a second case, a large group of people surrounded another 17-year-old, who was badly beaten and stabbed in the chest.  After viewing video and photographic evidence, police arrested a 34-year-old Austrian of Turkish origin as the principal culprit.

The arrests, in which the armed police Task Force Cobra was involved, went "smoothly" according to police. Several seized objects will be thoroughly checked as to whether they were used as the weapons.

The two young victims have since been released from the hospital. They are still in outpatient treatment. They belonged to a 20-member group, which was in the vicinity of the demo.