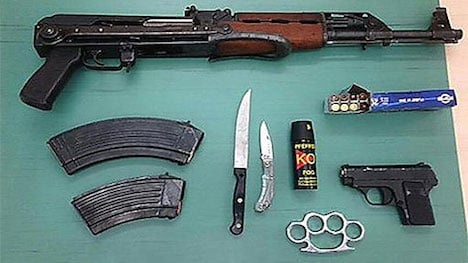 Four people have been arrested, and a Kalashnikov semi-automatic rifle with ammunition and a gas-powered gun were seized.  The four suspects are being held for questioning in Wiener Neustadt prison.

Investigators of the State Office of Criminal Investigation northeast had known since ten days of the planned attack, the police said on Friday.

The suspects had been monitored while conducting surveys of the potential target, which was a luxury hotel near Gablitz where one of the gang had been working.

The leader of the gang, a 47-year-old Kosovar, planned to carry out an armed robbery using the automatic weapon.  A 46-year-old Romanian woman was being blackmailed by the Kosovar due to a high level of drug debt which she owed him, up to five figures.

She had allegedly told the man of the whereabouts of a safe containing a significant amount of money, which was to be the target of the attack.

In addition, the gang had already planned a getaway to Spain after the robbery.

Apparently, the Kosovar had scouted the location on several occasions, and had considered attempting the robbery on at least three occasions — but each attempt was aborted for "tactical reasons", according to the police spokesman.

Eventually, he decided to carry out the attack on Thursday.

Police moved in on Wednesday when the 47-year-old, and two of his accomplices from Kosovo, a 29-year-old man and a 34-year-old man, decided spontaneously to rob a food market in Vienna's Penzing district.  The 47-year-old had armed himself with brass knuckles, a knife and pepper spray, but apparently lost his nerve, and fled.

A blue sports bag containing the Kalashnikov, ammunition and a gas pistol was found in the backyard of a construction company in a Vienna house.  All suspects were arrested by the Austrian armed police team, Cobra, and were charged with suspicion of attempted robbery and criminal conspiracy.