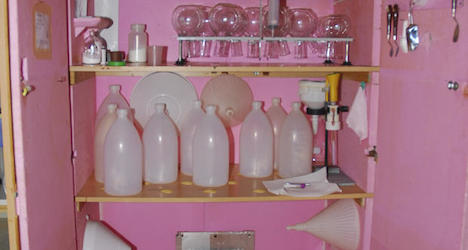 A 46-year-old and 52-year-old man had established a production lab in the small town with only 600 inhabitants in Lower Austria, which is popular as a cure resort.

The lab was discovered after the duo had disposed of some chemical waste into the toilet system, which clogged a pipe in the town's sewage system.

After the local council checked out the problem, they referred the issue to police, who executed a search warrant, and discovered precursor products, four unregistered guns, prohibited ammunition, illegal pyrotechnics, 300 grammes of unlicensed methamphetamine, as well as special machinery for meth production and an extensive laboratory.

Charles I. (52) and Klaus K. (46) had established a house similar to the set-up used in the TV show Breaking Bad. Over the past years, they imported more than 42,000 tablets from Romania, which they smuggled into Austria to use as precursors for meth production.

The companion of the younger man was also implicated in the drug production conspiracy, and all three suspects have been arrested and are being held in Krems prison to await a trial.