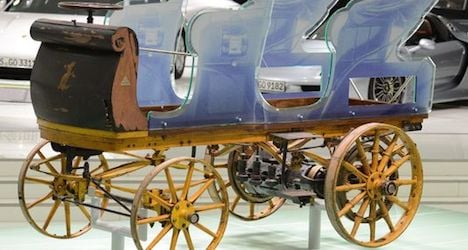 First built in 1898 while Porsche was working for car builder Jacob Lohner, the vehicle boasted a fully electric drive train, as well as 5 horsepower and a top speed of up to 21 miles per hour for short distances.

The car first hit the cobblestoned streets of Vienna, Austria, on June 26th 1898, when Ferdinand Porsche was 22. He engraved the code "P1" (standing for Porsche, number one) onto all the key components.

After distinguishing itself in a race for electric cars in 1899, the car was stored in a barn in Austria in 1902 — and was not discovered again until 2014.

Porsche himself drove the car that won the race, crossing the finishing line a good 18 minutes ahead of the second-placed car.

Technically, the car is known as the 1898 Egger-Lohner electric vehicle, C.2 Phaeton.  The restored vehicle may be viewed at the automotive museum in Stuttgart, Germany.