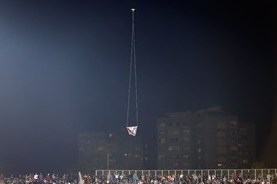 The drone that sparked the fighting in Belgrade. Photo: APA/Drobnjakovic

Around 9.30pm around 50 Albanians gathered in Ottakringerstrasse and threw bottles and burning objects at a Serbian cafe.

Police were able to control the crowd but at 10:30pm a group of 250 Serbs tried to break through police barriers.

Armed police with dogs from across Vienna were called in to provide backup and Ottakringerstrasse, the outer Gürtel road and surrounding streets were closed to traffic.

Police said they were able to prevent any major clashes and at around 11:30pm the two groups dispersed. No one was injured but 14 vehicles were damaged, including police cars.

"A group of 250 to 300 people ran away in all directions, or tried to hide in cafes. Some also ran to the U-Bahn and managed to get away,” police spokesman Paul Eidenberger said. He did not say how many police officers had been deployed.

No one was arrested but 30 people were reported for damage to property and could be charged.

The brawl in Belgrade involved players from both sides and a number of pitch invaders from the stands. It was sparked after a drone had been flown above the pitch, lowering a flag bearing an insignia of ‘Greater Albania’.

The match was Albania’s first visit to Belgrade since 1967 and was highly sensitive given long-running tensions over Kosovo, which declared independence from Serbia in 2008 and has a majority ethnic Albanian population.

According to Serbian police, the pilot of the DJI Phantom drone was Olsi Rama, the brother of the Albanian prime minister.  This has been denied however.

"I am very disgusted by the allegation of my having any involvement in the piloting of the drone," Rama told CNN on Wednesday.  He said he had been taking pictures of the game from a VIP suite at the stadium.