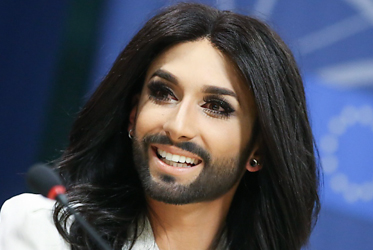 At a press conference before the concert she admitted that she is “no politician” but that she feels she has a message to communicate “as an artist”.

She said she was disappointed that issues such as same sex marriage were still cause for debate and said “decisions were needed, rather than more discussions” to ensure equal rights became a reality.

Wearing a white pant suit which set off her trademark jet black facial hair and flowing locks, she said there was still "work to do" to ensure respect for all, regardless of their colour or sexual orientation.

The 25-year-old drag queen, who is also known as Tom Neuwirth, attracted an enthusiastic crowd of several hundred in the rain outside the grey and glass parliament building in central Brussels for a short series of songs.

Comments on social media from spectators said that Wurst had delighted the crowd with her performance and that there had never been such applause outside the parliament before.

Austrian Greens MEP Ulrike Lunacek was one of five MEPs from five different parliamentary groups who invited Wurst to perform.

Lunacek, who is the first openly lesbian politician in Austria’s parliament, said that Wurst “has an important political message – the right to live in peace and freedom – not just for the gay community but for everyone.”

The concert was intended to support the adoption in February of the report against homophobia and sexual discrimination.

Wurst received no fee for her appearance and the cost of organising it (€18,000) was covered by Lunacek's funds and money from the Greens faction.

From #Conchita to the EU: "Raise like a Phoenix" #seacabó pic.twitter.com/JgXpD55ZLH