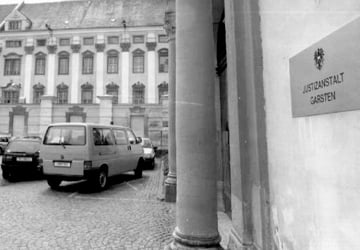 Serbian Ilija B took part in the armed robbery of a jewellery shop in Eisenstadt in November 2005.

A 22-year-old watchmaker who had followed the masked gang as they were driving off in their getaway car was shot in the face by one of the thieves at close range. He needed full time care after the attack and died seven years later from his injuries.

Austrian detectives tracked down Ilija B and two other Serbs and they were arrested in Serbia in December 2006, for the brutal jewellery shop robbery as well as numerous other burglaries.

However the Serbian authorities released Ilija B and one other suspect, Slavko P, days later, for reasons unknown.

Ilja B was later sentenced in Germany for six and half years for aggravated robbery. After serving half of his sentence he was extradited to Austria, and given an additional six year sentence for the Eisenstadt robbery.

He should have been in jail until autumn 2017 but the prison computer in Garsten miscalculated his release date, failing to include the three years of the German sentence he still had to serve.

After his release he was banned from living in Austria and deported to Serbia. There is now a European arrest warrant out for him as he was due to be the star witness at Slavko P’s trial for murder and robbery in Eisenstadt on October 15th.

Peter Prechtl, head of the prison directorate, said there would now be a review of all discharge data in local prisons after the embarrassing mistake.

"Of course this mistake hurts, but the prison employees are basically good people," Prechtl said.

It is customary that two prison officers check all personal data for prisoners, including release dates, but in future a senior officer or prison director will also be checking any data for serious criminals, he added.

The Pink Panthers group is behind armed robberies targeting high-end jewellery stores in Europe, the Middle East, Asia and the United States.

They are believed to have carried out robberies worth in excess of €330 million since 1999. Hundreds of suspects are linked to more than 340 robberies in 35 countries.

Many gang members are known to originate from the former Yugoslavia, but they work across countries and continents.

The Panthers got their nickname after a diamond stolen during a raid in London was later found hidden in a jar of face cream, copying a tactic used in the original 1963 Pink Panther crime comedy, starring Peter Sellers as Inspector Clouseau.