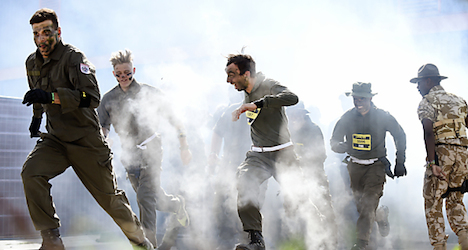 Participants ran over a five-kilometer long course, trying to avoid designated zombies and special obstacles.  Each participant was carrying flags, which the zombies tried to snatch to show they had been successful in their 'attack.'

The catch is, these are not the slow, shambling zombies of George Romero.  These are fast zombies, like in World War Z.

Clearly, something about zombies chasing you for fitness reasons struck a chord in Lower Austria, as participant numbers exceeded those of similar events in Munich and Berlin combined.  Organizers described the "perfect operation" of Austria's premiere zombie run, with gorgeous weather and "no complications."

Organizers said the results showed that Austrians were "crying out" for more Zombie Runs in Austria.  When asked for comment, one of the zombies is reported to have said "Brainnnnnsss."