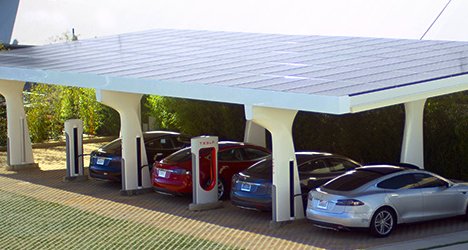 The new station at Hotel Kaiserdorf in Salzburg is the third such charging point in Austria and will enable drivers to comfortably make the distance between Innsbruck and Linz, and also from Vienna to Munich.

Offering one of the most powerful charging technologies in existence, the Supercharger stations can deliver up to 135 kilowatts of direct current directly into the batteries of the Model S e-car, making a half charge possible in as little as 20 minutes.

The new German Supercharger station is located at the OMV petrol station in Irschenberg, just off the A8, one of the Germany's most important motorways.

This site will allow Model S drivers to access the busy route from southern Germany to the Austrian and Italian Alps.

Currently there are already 21 Supercharger stations in Germany-Austria-Switzerland region.

In the USA, the Tesla Supercharger network is so advanced it is possible to cross the entire country making stops at the company's charging stations.