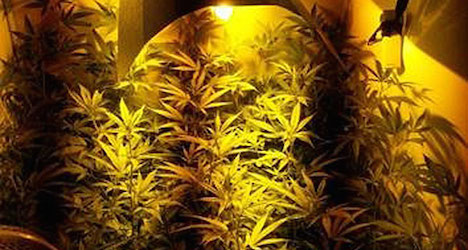 Some of the 25 plants -- without an irrigation system. Photo: Police

On Sunday evening in the Vienna suburb of Ottakring, two brothers were engaged in a heated discussion about botanical matters, and tempers were frayed.  Unfortunately, a nosey neighbour got tired of the bickering, and called the police.

When officials arrived to talk to the pair, they found a cannabis plantation fully equipped with 25 plants growing in their apartment — although it didn't have a functioning irrigation system, which was the source of the argument.

Police spokesman Patrick Maierhofer explained that one of the brothers was insisting on buying a new irrigation system to keep the plants at optimum levels of hydration, but the other brother opposed this due to the cost, and felt that they should continue to water the plants manually.

In addition to the plants, police executing a search warrant found cannabis herbs, several tablets and utensils for consuming drugs, all of which were seized.

The two brothers, aged 22 and 25 years, were arrested for further questioning and will be charged with cultivation of illicit drugs.