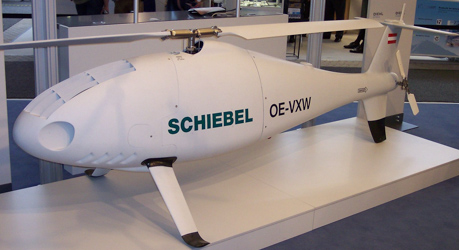 The Organization for Security and Cooperation (OSCE) told the Wiener Zeitung that it plans to use Schiebel unmanned aerial vehicles (UAVs) for its observer mission.

Both the OSCE and Schiebel have their headquarters in Vienna.

Schiebel’s remote controlled helicopter drones, the Camcopter S100, have a maximum take-off weight of 200 kilograms, and can fly for six hours.

They have a maximum speed of 220 kilometres per hour and can fly to a height of 5,500 metres. They can carry various payloads, such as optical cameras and infrared sensors, which provide high-resolution images even at night and in cloudy weather.

OSCE spokesman Shiv Sharma said the group would initially deploy two drones at the end of September to the beginning of October, and that more would follow later.

Ukraine's president said on Wednesday that Russia had removed the bulk of its forces from his country, raising hopes for a resolution to the conflict in which more than 3,000 people have been killed. Moscow denies sending troops.

In total, the OSCE has 221 monitors in Ukraine and it could have up to 500 under its mandate, the spokesman said.

Schiebel has not said how many drones the OSCE has bought, or how much they cost. Schiebel drones are unarmed but are mainly sold to the military.

The Italian military has bought several Shiebel Camcopters, which will reportedly be used to detect illegal immigrants in the Mediterranean, for border controls, and sea rescue operations.

Germany is also sending its own drones to join the OSCE ceasefire monitoring mission.