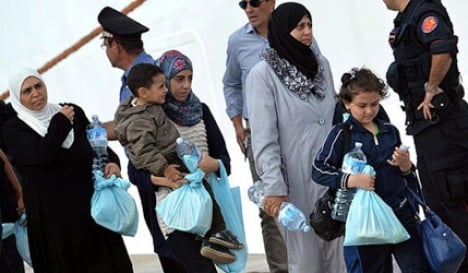 On Wednesday, a truck was inspected and found to contain 39 Afghans, among whom there were 12 children.  One of the children, a nine-year-old boy, was severely disabled, and at least one of the women (25) was heavily pregnant.

The truck was intercepted on the A4 highway from Hungary near the Austrian town of Bruck an der Leitha.  The 39 people had been cooped up in the truck for several days.

The Afghans were taken to the nearby town of Bad Deutsch Altenburg for processing.  No arrests have yet been made in connection with the people smugglers.

A few hours later, yet another case of trafficking was discovered, involving ten Syrians and seven Iraqis in a vehicle in the nearby towns of Pachfurth and Gerhaus.

All 56 of the refugees have applied for asylum in Austria, however under the Dublin III accords, they are required to apply in the first EU country in which they arrive.

The previous week, a train from Italy was intercepted with 48 asylum seekers on board.