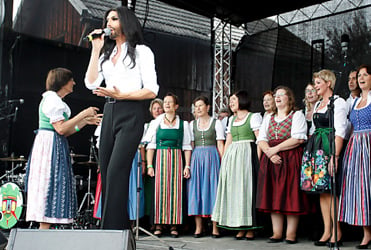 Conchita at a recent event in her home town of Bad Mitterndorf. Photo: APA/Erwin Scheriau

Austrian Greens MEP Ulrike Lunacek was one of five MEPs from five different factions who invited Wurst to perform. She said that the hour-long concert was part of a campaign to fight discrimination.

"The wonderful signal for openness and anti-discrimination that the people of Europe gave Conchita Wurst with their votes must be translated… into forging a society and legal framework allowing everyone to live and to love without fear," Lunacek said.

Wurst won the Eurovision Song Contest – an annual music extravaganza now more than 50 years old where people all over Europe and beyond vote for their favourite song – in Copenhagen in May.

In recent months she has performed at LGBT (lesbian, gay, bisexual and transgender) events around Europe and in July closed Jean Paul Gaultier's haute couture show in Paris wearing a black and red vampire-themed gown.