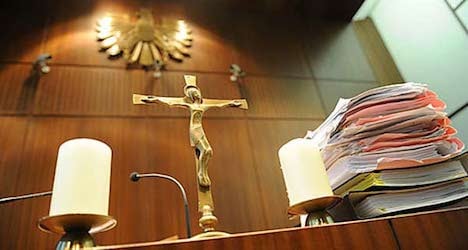 The football fans armed themselves with a broken broom handle, beer bottles and wooden staves, and forced entry through the door of the Turkish-Kurdish Cultural Association.

Two men stood in their way, and were badly beaten, with one requiring hospitalization.  Ironically, at the time the club house was being used for a meeting of the Comintern Communist club.

The events allegedly took place on the day of a match, in which right-wing fans belonging to the self-styled "Immortals" were on their way to the Generali Arena, for a Vienna derby against SK Rapid Wien.

The Immortals are well known for their racist and neo-Nazi slogans, chanting words such as "Adolph Hitler is my friend", "Zig Zag Gypsy Pack", and "Racist, Fascist, Hooligan."

The trial is expected to last three days, and is being conducted under conditions of heightened security.  A supporters' demonstration is planned for the second day of the trial.

The men have been charged with trespass and assault.  Some of the participants were also allegedly involved in the demonstration against the Vienna Academics' ball in early 2014, which also resulted in a trial for assault.