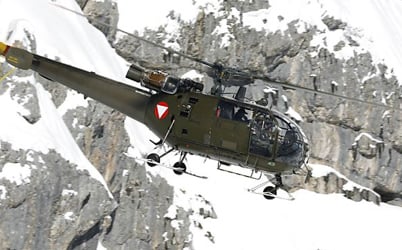 The interest group of professional officers (IGBO) has called on parliament to take immediate action.

"It is a fact that we have lost approximately 25 percent of our operational capability in the helicopter fleet, because of the reduced fuel quota that was imposed in Spring – and we are threatened with further reductions in 2015," Putz told the Oberösterreichischen Nachrichten paper.

The Alouette III helicopter fleet will have to shut down, and the Bell OH-58 "Kiowa" will soon be replaced.

The helicopter fleet is set to be reduced over the next five to six years by more than half, according to Putz. You lose "sustainability and the ability to be in several places simultaneously," he said, in relation to disaster relief.

IGBO has described the discussion about further cutting the budget of Austria’s Bundesheer (army) as “irresponsible”.

In a press release IGBO asked parliament, among other things, to determine the necessary funds needed to operate the armed forces, taking into consideration personnel and equipment.

This amount should then be fixed “and not questioned by any budget,” it said. It also suggested that the General Staff should be appointed in the future by parliament, as "state security is too important to be subordinate to party interests."