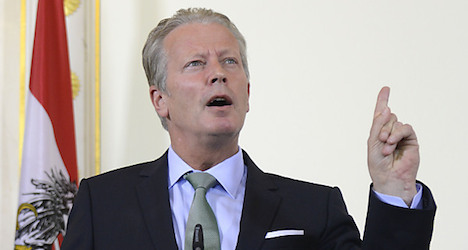 Reinhold Mitterlehner has been selected as new leader of the ÖVP. Photo: APA

The ÖVP met as previously scheduled on Tuesday evening, but for an unexpected item on the agenda – they had to select a new party leader after the shock resignation of Michael Spindelegger.

Spindelegger resigned on Tuesday morning, citing the challenges of finding support for his economic reforms in the scope of his role as Finance Minister in the coalition government.  In addition to that post, he was also Austria's vice chancellor.

Mitterlehner told a news conference that new posts for government ministers, including the crucial role of Finance Minister, will be decided in the next few days. In an interview on Austrian national radio on Wednesday, Mitterlehner said it was unlikely that he would take on the role.

Observers say both the ÖVP and its coalition partner, the Social Democrats (SPÖ) are relieved by the choice of the experienced politician.

Mitterlehner is considered to be capable and more open for political ideas outside of his own party, as opposed to his predecessor Michael Spindelegger.

Mitterlehner was born in Upper Austria in 1955. The legal expert started his career in the Economics Chamber of Upper Austria, staying there from 1982 until 1992.

The 58-year-old is married to his second wife, and has three children.