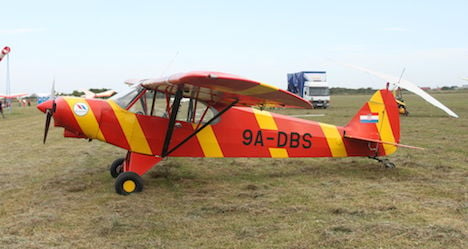 Piper PA 18 similar to that which crashed. Photo: Jerry Gunner/Wikimedia

The accident occurred at a vineyard between Podersdorf and Gols, in the district of Neusiedl am See in Burgenland.

According to the regional safety centre, the 65-year-old pilot was killed immediately in the crash. No one else was injured.

The plane was a Piper PA 18, known locally as a Starfighter. According to witnesses, the plane collided with a power line, and exploded on impact with the ground.

The top cable of the power line was severed, according to Florian Ettl, the commander of the Podersdorf fire brigade.

The wreckage of the plane was still burning when firefighters arrived, but they were too late to save the pilot's life. The fire department from Podersdorf attended with four vehicles and 25 firefighters.

An air accident inspector will evaluate the causes of the accident, said Ettl.