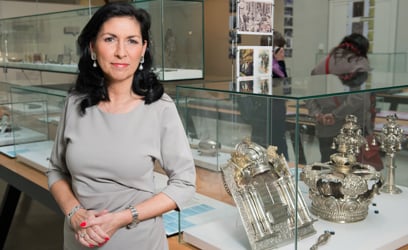 After covering most of the world as a global news reporter, Spera presented the ORF’s main news programme, becoming one of the most recognisable faces in Austria’s media scene.

Now, her job is to find whatever is new and noteworthy in Jewish arts and society and to enhance the museum visitors' experience. In an exclusive interview with The Local she discusses the museum’s mission and her vision for its future.

What do you enjoy most about your job?

To be director of the Jewish Museum Vienna means fulfilling a variety of jobs. The most creative part is to think about new exhibitions, to work on concepts, to bring all the new ideas to life. Only a couple of months ago we presented our new core exhibition to the public. “Our City. Jewish Vienna – Then to Now” which tells the history, but also the present of the Austrian and Viennese Jews from the Middle Ages up until now. It is a great pleasure to realize how well the audience and especially young people react and deal with our new concept that starts in 1945, with the new beginning of the Jewish community after the Shoah.

What are you doing to attract a younger audience to the museum?

One third of our visitors are young people. Therefore the work of our educational department is a very important part of the museum’s work. Especially as we are the only institution in Vienna or even in Austria that deals with recent Austrian history and of course also with the impact of the Holocaust on Jews in Austria.

We offer a broad variety of programmes for children, for school classes and for a young audience, that present all the different aspects from different perspectives. Our younger audience has changed within the last couple of years. It is of course much more diverse, we now have more young Muslim visitors within school classes, this gives a perfect possibility to engage in a very fruitful dialogue about so many things we all have in common. Why do you think the recent Amy Winehouse exhibition was such a success?

We were very happy to see that the Amy Winehouse exhibition attracted more than 22,000 visitors. It was an exhibition that also drew lots of young people to the museum. They wanted to get to know a part of Amy Winehouse´s life that was not open to the public, especially also the history of her family, who fled from the pogroms in Belarus at the turn of the 19th century to start a safe and new life in London.

The Jewish background of Amy Winehouse´s  life was also not known in the public. It was a pleasure to realize that all the visitors that came to see the Winehouse show also went to visit our permanent show about Jewish life in the Middle Ages and the adjacent archaeological excavations of the medieval synagogue of Vienna, which are located on Judenplatz, where the Amy Winehouse exhibition was.

Oskar Deutsch, head of Austria's Jewish Community, has said that the situation for Jews in Europe is becoming increasingly threatening. Does the Jewish Museum ever try and reflect the current situation or have any influence on the political agenda?

The Jewish Museum is a cultural institution owned and financed by the City of Vienna. The Jewish Community (IKG) is the organization that has to deal with the political issues and discussions with the government in the first place. It is up to the president of the community to negotiate these issues. Whilst being responsible for different topics the Jewish Museum also always reflects the current situation, but the political agenda remains definitely on a level of the Jewish Community.

Do you have a sense that Vienna's Jewish population feels under threat in the current climate?

Compared to other countries and cities in Europe, Vienna and Austria are in the fortunate position that the community does not suffer as other communities do. If we think of the situation in France or in the Scandinavian countries where radical Muslim activities make Jews afraid to even leave their homes, or if we think of Germany and the series of Neo-Nazi murders, we have not experienced comparable incidents in Vienna and we do very much hope that a peaceful life for the community will be possible in the future too.

How do you plan to promote the work of Vienna's Jewish Museum over the next few years? What big exhibitions do you have planned?

This autumn we will present a show on Kosher Food and Tradition at the Museum in Palais Eskeles, and in the Museum Judenplatz we will show a smaller exhibition about the “Südbahnhotel. The Magic Mountain Abandoned”. In this hotel the cultural avant-garde of the 20th century spent their summer holidays.

We will also open a show at the museum of Modern Art in Moscow “A Tale of Two Cities” where we have invited three Russian and three Austrian artists to work with our collection and with the archive of “Memorial”, a human rights organization that deals with the victims of the Soviet Gulag. To work on that was a very exciting challenge.

Last but not least we are showing our exhibition about Andy Warhol's Jewish Portraits at the Jewish Museum in Melbourne. This is the first time that the Jewish Museum Vienna will have one of their own exhibitions shown in Australia. We have our exhibition plans ready for the next years, one of our great projects is a show about the history of the Ringstrasse, which was considered a Jewish Boulevard, where we also will present the history of all the wonderful mansions that were built by important Jewish families from Vienna, a very thrilling but at the same time emotional experience.

The Jewish Museum Vienna is open Sunday – Friday (closed on Saturday). There are two locations – at Dorotheergasse 11, 1010 and at Judenplatz 8, 1010 Vienna.