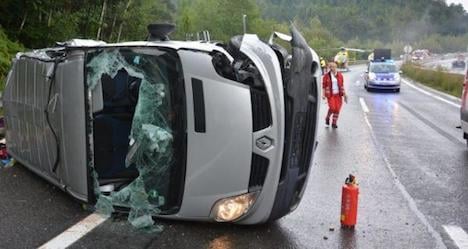 According to the regional fire command, the driver of a minibus with nine passengers lost control of the vehicle which rolled several times near Aspang in the direction of Vienna.

The accident occurred about 3:30 p.m. at a location some 74 kms south of Vienna.
The van belonging to a nine-member Polish family suddenly began skidding, slammed into the guardrail and rolled over several times, according to Franz Resperger of the northeast regional fire service control.
The Polish family had been returning home from their summer holidays according to Resperger.  A 35-year-old woman and her nine-year-old daughter died as a result of their injuries.
The husband of the woman and father of the nine-year-old girl was slightly injured, but suffered a severe shock.  "He had to watch it all," said Resperger.
During the rollover several people were thrown from the vehicle. The highway had resembled a battlefield, with debris scattered over 150 meters. File photo: APA (Archiv/ÖAMTC)
The accident caused a major mobilization of emergency services. The Austrian Automobile Association (ÖAMTC) provided two emergency rescue helicopters.  Several fire and police vehicles were also in attendance.
Because of the salvage work the motorway in the direction of Vienna had to be closed until 4:30 p.m.
Weather conditions may have been a factor, as most of eastern Austria was experiencing heavy rain on Saturday afternoon.