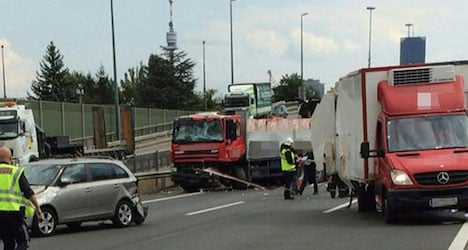 The accident occurred on the A22 highway just before 2 p.m. on Vienna's A22 highway, close to the Danube river.  Three people were seriously injured.

Among the ten slightly injured persons were a three year old boy and a six year old girl.

Both of the trucks lost their cargo, consisting of bricks and meat.  The highway was closed for several hours as the clean-up and vehicle removal progressed.