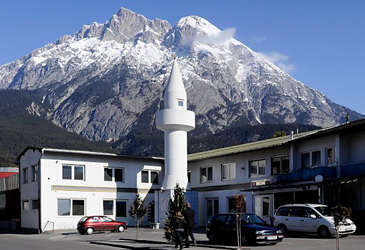 The mosque and minaret in Telfs. Photo: APA/Parigger

The Nazi symbol was sprayed in black paint overnight on Tuesday, around the entrance to the mosque and on some mosaic tiles.

It is not known who defaced the mosque but the State Office for the Protection of the Constitution has launched an investigation.

Among the roughly 15,000 residents of Telfs, about 2,400 people signed a petition against the building of the mosque, and nearby homeowners threatened lawsuits.

A compromise was reached wherein the mosque's minaret would be only 15 meters tall, rather than the 20 meters originally planned by the cultural centre.  It was also agreed that there would be no muezzin call for prayers from the minaret.