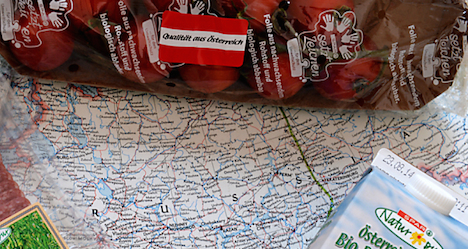 "This applies to goods that have been produced and labeled for the Russian market and which are now in stock or were already on the way to Russia," said Agriculture Minister Andrae Rupprechter.

Additional losses resulting from price declines have yet to be estimated, according to the Agriculture Ministry.
The European Commission wants to provide support to countries affected by the Russian import ban on food.  EU Farm Commissioner Dacian Ciolos announced after a meeting with experts from EU countries in Brussels on Thursday that he will introduce early next week new market stabilization measures aimed at perishable fruits and vegetables.
These products are "clearly in trouble," Ciolos said. The EU-Commission action will be "proportionate and cost-effective."
Additionally, the Commissioner will step up screening of markets. "This extraordinary situation we have with the Russian import ban requires faster and better access to market data."
For this purpose, a monitoring mechanism should be created to help all EU countries, he said.  Ciolos assured farmers that he would propose further support steps, should this be necessary.
According to estimates by the European Commission, 1.7 percent of the pork, 0.4 percent of the beef and 0.6 percent of poultry production in the EU are affected by the Russian ban.
Russia had imposed the import ban as a countermeasure against the sanctions imposed by the EU against Moscow for its alleged support of Russian separatists in Ukraine's civil war.