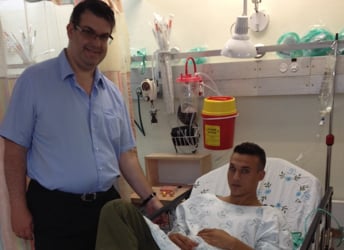 The area has suffered greatly in the recent round of fighting.

“People living on the border with Gaza face being attacked by rockets every day – it's impossible to lead a normal life, and many have been forced to leave," he told The Local.

"They want the Israeli government to do whatever they can to stop these attacks."

"We are showing millions of Israelis that we are standing behind them and are grateful to them, as Jews and as Austrians."

The group visited wounded civilians and soldiers in the Barzilai Medical Center in Ashkelon, as well as an Iron Dome site that protects approximately 500,000 people.

They took gifts of traditional Manner-Schnitten chocolate wafers for the wounded soldiers.

The delegation also expressed their solidarity with Holocaust survivors in Kfar Maimon, as well as with soldiers who are protecting the population against attacks coming from Hamas’s tunnels.

Deutsch welcomed the recent announcement of the Austrian government to address anti-Semitic incitement with legislative action.

"The situation for Jews in Europe becomes increasingly threatening. The support of individual governments on security issues is a first step,” he said.

He said that although he was in favour of peaceful demonstrations supporting Palestinians – they became dangerous as soon as they became anti-Israeli, and anti-Semitic.

Israel and the Palestinians have begun a fresh five-day ceasefire in Gaza, agreed at the end of a three-day truce. The two sides are expected to continue indirect talks mediated by Egypt in Cairo.

The Israelis launched a military operation in Gaza on July 8th to stop militant attacks from Gaza.