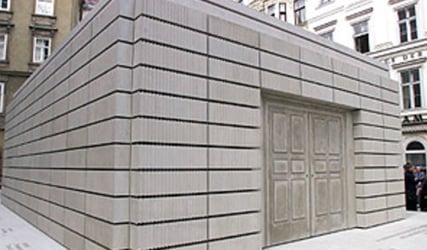 A memorial to the 65,000 murdered Austrian Jews at Judenplatz in Vienna. Photo: APA

A group of 60 people, including Holocaust survivors, their relatives and friends, will visit Vienna from the USA, Israel, the UK, Australia, Uruguay and Argentina.

The eldest of the group is a 94-year-old woman, who was 18 at the time of the Anschluss, when Austria was annexed into Nazi Germany in 1938. She will be accompanied by her two nieces.

Another guest, Mr Honig from the USA, was born in 1923 and remembers being a boy scout in Vienna.

The group will be in Vienna for a week, from 7th to 14th September and will meet with President Heinz Fischer and enjoy traditional Viennese food at the City Hall and at a local Heurigen.

On Friday 12th September one of the guests, Thomas Peter Schiller from Australia, will lay a remembrance stone for his grandparents, who were murdered by the Nazis in 1942.

In a separate event, Vienna’s Jewish Community will be holding an open day on 14th September – a chance for people to visit the community and learn about Judaism.

A special highlight of this year’s programme is a visit to the Jewish Cemetery in Währing. It opened in 1784, and up until the late 1800s it was the main burial site for Vienna’s Jewish community. Historian Tina Walzer will be offering a guided tour.

Besides the St Marx Cemetery it is the last remaining cemetery in Vienna in the Biedermeier style. It was partially destroyed during the time of the Third Reich, and is now only partly accessible due to its deteriorating condition.

There will also be a chance to have a tour of Vienna’s 150-year-old City Temple, the main synagogue in the 1st district.