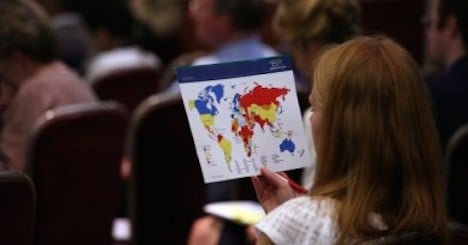 Photo: Institute for Economics and Peace

The index was created by the Institute for Economics and Peace (IEP), a non-profit think tank dedicated to shifting the world’s focus to peace as a positive, achievable, and tangible measure of human well-being and progress.

With offices in Sydney and New York, the IEP was established in 2009 to conduct research on peace and security world-wide.  It has developed a methodology that ranks countries globally on how peaceful they are, based on 22 separate indicators.

Most people understand the absence of violence as an indicator of peace. This definition also allows for the measuring of peacefulness within, as well as between, nations. The GPI ranks independent countries by their ‘absence of violence’ using metrics that combine both internal and external factors.

According to the website, the Institute for Economics and Peace, in conjunction with the Economist Intelligence Unit and with the guidance of an international team of academics and peace experts, has compiled the Global Peace Index (GPI). The Index is composed of 22 indicators, ranging from a nation’s level of military expenditure to its relations with neighbouring countries and the level of respect for human rights.

The index has been tested against a range of potential “drivers” or determinants of peace – including levels of democracy and transparency, education and national well being.

The team has used the latest available figures from a wide range of respected sources, including the International Institute of Strategic Studies, The World Bank, various UN offices and Peace Institutes and the Economist Intelligence Unit. The Global Peace Index is intended to contribute significantly to the public debate on peace.

The indicators are divided into three key thematic categories:
• 5 measures of ongoing conflict such as number of conflicts fought and number of deaths from organized conflict.
• 10 measures of societal safety and security such as number of displaced people, potential for terrorist acts, number of homicides, number of jailed population.
• 7 measures of militarization such as military expenditure, number of armed service personnel, ease of access to small arms and light weapons.

This, in turn will provide a new platform for further study and discussion, which will hopefully inspire and influence world leaders and governments to further action.

The website Vision of Humanity which houses the Global Peace Index, is a strong proponent of the need to further study, advocate and act on peace.

This website focuses on the major issues facing us in the 21st century and it brings a balanced approach with factual information that is positive and solution based.

It groups together a number of interrelated initiatives focused on global peace which enjoy the support of a wide range of philanthropists, business people, politicians, religious leaders and intellectuals.

It brings a strategic approach to raising the world’s attention and awareness around the importance of peace to humanity’s survival in the 21st century.