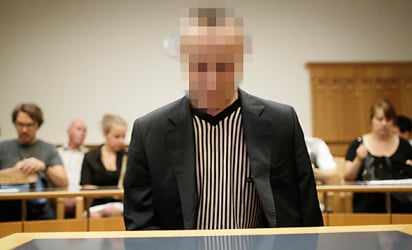 The man in court. Photo: APA/Hochmuth

The 38-year-old man had been previously sentenced in January 2012 to four years in prison for armed robbery. However he took advantage of being allowed out on day release for good behaviour from Hirtenberg prison by robbing three banks in Vienna.

“It doesn’t sound very good,” his lawyer admitted. He said that his client was “a family man who was well behaved for almost 20 years and worked as a carpenter.” In his defence he said the man fell into “a downward spiral” due to gambling debts and then committed the robberies.

As the man started to lose greater sums of money through gambling he gave up his job and drifted into petty crime, because he thought he could make more money that way.

He was arrested after a robbery in August 2011, along with two accomplices, and sentenced two months later. After two years he was granted day release privileges for good behaviour – and initially he used these days to visit his girlfriend in Ottakring.

However, he claims that he desperately needed money to pay back loan sharks he had borrowed large sums from and so in October 2013 and February 2013 he robbed banks in Vienna – simply by writing a note demanding money and slipping it to the bank teller. After a third bank robbery, in March 2014, he was arrested. He had stolen a total of around €38,000.

After his arrest some of the money was found in his girlfriend’s flat, where unbeknownst to her he had sewn €12,000 into jackets. He had given her €6,000, which he told her he had won. She has since broken up with him.

He also admitted committing three other previously unsolved armed robberies, of a bank and two post offices – pocketing a total of €35,000.

The defendant accepted his sentence. "I want to serve my time, continue my education and find work again after my release," he said.