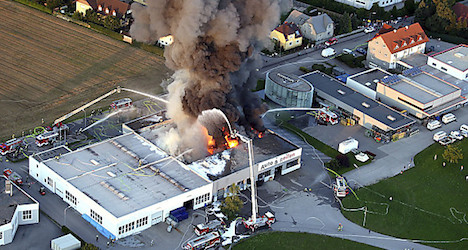 Franz Resperger from the northeast regional fire service command informed the Austrian Press Agency (APA) that the fire was under control, but that operations would continue until Tuesday morning. Three people were injured as a result of the fire.

There was no significant risk to local residents, because the burning building is located in an industrial area, according to Resperger.

A remote-control fire-fighting robot was deployed in the operation, as well as three elevated lift platforms, four water cannons and 18 fire hoses.

The three injured persons were 15, 18 and 20 years old.  Each suffered from smoke inhalation, circulatory problems and minor hand injuries.
Many emergency calls were received around 7 p.m. on Monday evening.  A 300-metre-high column of black smoke was seen in Amstetten and Linz.  Late Monday night, there were 250 fire fighters from Lower Austria and Upper Austria in attendance.
The initial cause of the fire is unknown at this time.