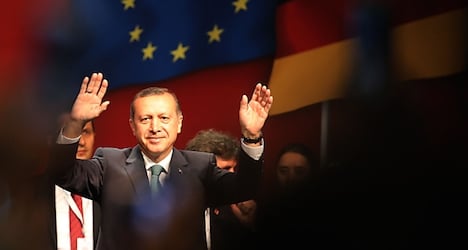 Some 2.8 million Turks are eligible to vote from abroad, among them 90,000 in Austria. However, only 6,600 voters in Austria registered for the vote. They may cast their votes on the weekend in Vienna, Salzburg and Hohenems in Vorarlberg  province .

Turkey itself goes to the polls on Aug. 10 to choose between current Prime Minister Recep Tayyip Erdogan and two opposition candidates. Until now expatriates were in the past allowed to vote only at Turkey's borders.

Erdogan, who has dominated Turkish politics for more than a decade but is barred by party rules from standing for a fourth term as prime minister, has said the direct nature of the vote will imbue the presidency with far greater clout.

Polls suggest he will win the simple majority needed in the first round. Two surveys last month put him on 55 to 56 percent, a 20-point lead over his nearest rival, Ekmeleddin Ihsanoglu. The diaspora vote will count as never before, especially those from Germany.

There were around 270,000 people with a Turkish background living in Austria. As of January 1, among them there were 114,682 Turkish citizens, according to Statistics Austria.