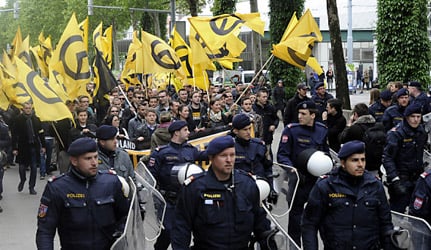 Police at the right-wing march in May. Photo: APA/Pfarrhofer

This comes amidst a debate over whether the police operation around the eviction of a squat in Vienna’s 2nd district on Monday was disproportionate.

It’s thought that over 1,000 police were involved in the day-long eviction in which 19 people were removed from the ‘Pizzeria Anarchia’ house.

Of the 878 police officers deployed for the demonstration on May 17th, 110 were in civilian clothes.

Around 100 people from the Identity Movement took part in the march, and 400 people from left-wing groups formed a counter demonstration. The march in central Vienna resulted in violent clashes between protesters and police.

A total of 58 people were arrested, and two officers were injured.

Police were forced to reach for their weapons 12 times – and had to use the baton four times. The Interior Ministry could not specify how many times they had to use pepper spray.

The majority of charges against the demonstrators included opposition to state power (20) and damage to property (19).

Meanwhile, the Vienna Socialist Party (SPÖ) is suggesting that the landlord of the ‘Pizzeria Anarchia’ house could be billed for the expensive police operation – as he went to court to request the eviction, despite having invited the young anarchists to live in the building himself in 2011.

"The question is whether the landlord is guilty of negligence, gross negligence or intent", Vienna SPÖ manager George Niedermühlbichler said.

The building is owned by Castella GmbH. Police in riot gear blocked off the street where the eviction took place. Photo: APA/OCZERET