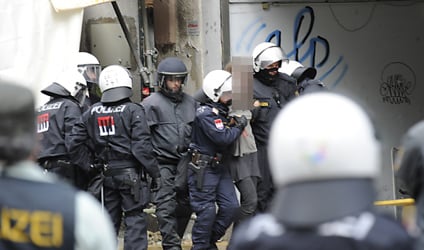 Police take someone from the building. Photo: APA/HERBERT P. OCZERET

Nineteen people were taken out of the ‘Pizzeria Anarchia’ squat, 15 men and four women, and arrested for attempted aggravated assault.

They have now been released, after being questioned overnight.

Twelve other people were arrested, who were protesting outside the house, and have also been released.

Police spokesman Roman Hahslinger said that around half of those arrested are German citizens.

Over 1,000 police officers are thought to have taken part in the operation. They were dressed in riot gear, and had an armoured car and water hoses.

Preparations for the court-ordered eviction began at 5:00 am on Monday morning. Police erected barriers around the street.

However the Pizzeria Anarchia activists had spent days preparing for the event, welding steel doors and blocking the entrance to the house with sofas and bulky furniture.

They also used barricades that the police had erected earlier that morning and then left unattended – something the police admitted was a “logistical error”.

The police said that part of the reason the eviction took so long was that the house had been booby trapped – in one area a stove had been positioned so that it would fall on the police.

There has been much criticism in the press and on social media of the size and cost of the police operation – with many people saying it was a disproportionate response considering the amount of people in the house.

The activists pelted police with eggs, feathers, paint and butyric acid from the windows of the house.

The Freedom Party and the ÖVP supported the police operation but the Greens were very critical of the “excessive” numbers and called into question the competence of Vienna's police chief Gerhard Pürstl.

The police would not confirm reports that there were as many as 1,700 police officers drafted in for the eviction.

Hahslinger said that there were "certainly not less than 1000", but admitted he did not know the exact number.

A police press release sent out on Monday said that "the number of police in the area numbered on average 400 and at the peak 500".

The exact number of police deployed, and the cost of the operation will be announced in a parliamentary inquiry.

The house had been occupied by the activists for over two years. The owner of the building actually invited them to move into an empty apartment himself, in November 2011, for six months.

The place is badly in need of renovations and the owner hoped that the anarchists would scare off the older tenants who were refusing to move, and clear the way for a new real estate project.

However, the squatters became sympathetic to the tenants' plight, as they explained in a recent blog post, and decided to stay.

Castella GmbH currently owns the building, and went to court to request the eviction.