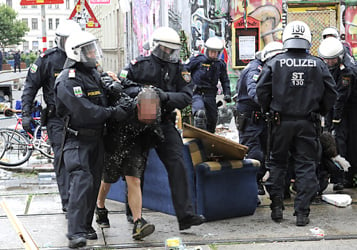 Riot police remove one of the activists. Photo: APA/Neubauer

Since 5:00 am this morning the activists, who have been occupying most of a house in Mühlfeldgasse for over two years, have been preparing for their eviction by blocking the entrance to the house and the street with sofas and other bulky piece of furniture.

Around 30 police cars and at least 200 police, some dressed in riot gear and gas masks, are at the scene and the entire street has been sealed off.

Police reportedly had to use chainsaws to get through some of the barricades blocking the entrance to the house.

Some journalists have not been allowed into the area, "out of concern for their safety". Passers-by have had their bags searched.

ORF journalist Petra Pichler reports that there are 1,700 police waiting to be called in if the situation escalates.

According to informal police sources, one policeman was injured when a TV was thrown from one of the upper floors.

A police spokesman said there are worries that a group of German anarchists may have travelled down to support the Viennese squatters.

It is unclear how many people were, or still are in the building – but unofficial sources say between 20 and 50.

A police helicopter is circling the area and there is also a truck with water cannons nearby.

Many people on Twitter are commenting on what they say is a disproportionate police response.

Vienna Greens politician Georg Prack said that in his opinion "the police operation bears no relation to the occasion. Hundreds of police officers, an armoured car, water cannons, and large-scale road closures are unsettling the local population."

The squat, which calls itself Pizzeria Anarchia, is the only one in Vienna. The owner reportedly invited the group of young anarchists to move into an empty apartment himself, in November 2011.

The place is badly in need of renovations and the owner hoped that the anarchists would scare off the older tenants who were refusing to move, and clear the way for a new real estate project.

However, the squatters became sympathetic to the tenants' plight, as they explained in a recent blog post.

Castella GmbH currently owns the building, and has offered the squatters a space in Vienna's 15th district. They are, however, refusing to move, as they say the owners are only interested in using them to "increase their profits".

"Tactics which were used by Castella GmbH to try and make [residents] leave include: vandalism of the supply systems, damaging the roof to allow rain to enter the flats, refusal to carry out maintenance work, nightly visits of intimidating individuals, financial offers and attacks with Butyric acid, used oil and paint," Pizzeria Anarchia's blog post said. The interior of the squat. Photo: fm5ottensheim.blogspot