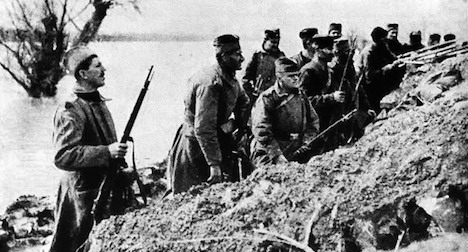 News-hungry, patriotic crowds had been massing for hours outside newspaper offices in Vienna when emperor Franz Joseph's "To My Peoples!" proclamation of war against Serbia finally came on the evening of July 28, 1914.

A month after a Bosnian Serb revolutionary assassinated Franz Ferdinand, heir to the Austro-Hungarian throne, in Sarajevo, the uppity Serbs were going to get a long-deserved bloody nose.

Special editions were ripped out of newspaper sellers' hands, and in Vienna at least, nationalistic songs were sung late into the summer night, triumphant speeches were made and thousands thronged the streets.

"Maybe people didn't think it would be over by Christmas, but the feeling was that it would be done by mid-1915," historian and Austrian Military Museum (HGM) director Christian Ortner told AFP.

"But Vienna was playing a game of very high risks."

Instead of a short war – and one confined to the Balkans as Vienna thought – this was the start of World War I, four years of conflict drawing in all the great powers of the time and killing nine million soldiers.

"Vienna thought it was probable that Russia would enter the war but… it was thought that their ally Germany, either with threats or by entering the war, could keep Russia in check," Ortner said.

In Berlin Kaiser Wilhelm II, grandson of Britain's Queen Victoria, had issued in early July his famous "blank cheque" saying that 83-year-old Franz Joseph could rely "in this case, as in all others, upon Germany's full support".

"Berlin didn't realise what it was getting into… They thought this was just another Balkan crisis, of which there had been several. Only once it became clear that Russia was mobilising was it realised how dramatic the situation was."

Vienna before 1914 was a grand imperial metropolis of two million people, a city of light of technology, its crystal-mirrored cafes a haven for intellectuals, scientists, avant-garde artists and musicians.

"It was a golden age of security," Austrian author Stefan Zweig would write later. "Slipping back to barbarity, to war between the peoples of Europe, was as unimaginable as witches and ghosts."

The strains were already showing in an empire then encompassing 50 million people speaking a dozen languages, and even before Franz Ferdinand was killed it was feared that when his uncle the emperor died, so might his realm.

But the global conflict that the doddering Franz Joseph – who passed in 1916 – unleashed from his Bad Ischl summer residence dealt an even more devastating blow to his empire than any had expected.

The invasion of Serbia proved a disaster, Austria-Hungary only managed to hold back the Russians thanks to German help and Italy's entry into the war in 1915 left the empire fighting a war it was not prepared for on three fronts.

When defeat came in 1918, more than a million of its soldiers were dead and the empire fell apart, leaving the German-speaking rump of Austria in chaos and starving, with the lands it once relied upon for food now cut off.

"An entire economic zone was swept away. Suddenly markets were behind borders, there was no more access to the (Adriatic) sea," Ortner said. "Vienna now had six locomotive factories, for example, just for little Austria."

And while soldiers elsewhere were hailed as heroes, in Austria they came home to a frosty reception. Officers had their insignia ripped off and their swords – synonymous with their honour – broken in front of their eyes.

This in turn would sow the seeds for an even darker chapter – Nazism and World War II – the horrors of which put the experiences of the first war somewhat "into the shadow", Ortner said.