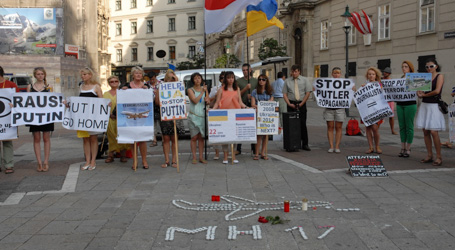 Organisers from the protest movement Democratic Ukraine – which has held over 80 demonstrations in Vienna since January – formed the outline of a plane in candles on the giant stone cross inlaid in the cobblestones of the square.

"The Ukrainian community of Vienna is gathered here in memory of the innocent lives who died on flight MH17 from Amsterdam to KL that was shot down by a terrorist rocket in eastern Ukraine, " Kuzymkiv told his audience, in both English and Ukrainian.

"We are crying with them, with their tragedy. We hope the whole world will help Ukraine to stop these terrorists so this tragedy doesn't happen again. Today we would like to show them truth and respect," said Kuzymkiv, calling for a minute of silence.

Kuzymkiv also paid tribute to the 300 Ukrainian soldiers killed so far in the conflict and appealed for financial aid for the "thousands of wounded soldiers and civilians, war widows, and children who have lost their fathers."

Yevzhen Lozhin, another DU organiser, told The Local he believed the shooting was an error of judgment.

"I think it was a mistake, a tragic mistake. The terrorists wanted to destroy a military transport plane.

I don't think anyone meant to kill civilians, but Putin is sending high tech weaponry into Ukraine, which people don't know how to use. I hope this tragedy will give Putin and Russia the chance to quietly leave and save face."

Lozhkin has already lost two close friends in the conflict.

"As Ukrainians we understand what has happened, because in Ukraine currently innocent people are constantly suffering. Now this conflict between the army and separatists has gone too far.

Until now, Europe has considered this an internal affair of Ukraine, but now they understand that it just won't go away so easily. That Russia is sending troops and military hardware is obvious to everyone."

Lozhkin scoffs at Russian President Vladimir Putin's official statement that "because the incident happened over the territory of Ukraine, it is therefore the responsibility of the government of Ukraine."

Andri Grishschenko, from the Union of Ukrainian Lawyers, told The Local he hopes there will now be a full and open inquiry into the incident.

"Because people from so many different countries were killed, it is essential that there is a full and open judicial process. A military tribunal needs to be established because it is a war crime, and the people who carried out this act must be brought before an international military tribunal."

"It's also essential that the international community investigate how they can control weapons from coming from the territory of Russia," said Grishchenko.

"If it's so easy to move missile systems from Russia to the territory of Ukraine, then no one can guarantee that such missile systems won't then appear in some other country. This is a question for all politicians in all countries of the world."

"Today almost all of Europe is in danger. The sooner there is an investigation, the sooner the facts are uncovered – who, how, and under what circumstances the weapons which shot down the plane were brought into Ukraine, the faster the security of Europe can be ensured."