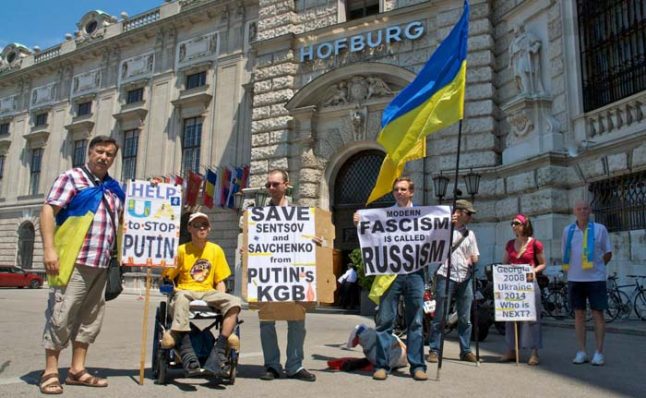 Protesters outside the Hofburg. Photo: Kim Traill
"The situation in Ukraine is critical, so it is a major theme at almost every OSCE meeting," one protest organizer, Yevhen Lozhkin, told The Local.
"OSCE representatives and diplomats frequently come to talk to us and hear our views on the crisis," said Lozhkin.
"Today there will be a three way video conference between representatives of the OSCE, the Ukrainian authorities and representatives of the illegal armed terrorist groups which are operating on behalf of Russia about regulating the conflict in Ukraine."
While today's meeting was relatively subdued, Lozhkin estimated that on the day of Putin's visit to Vienna last month, a crowd of over 300 turned out to protest against Russian interference in their homeland.
Another regular demonstrator, Andrei Grishchenko, from the Union of Ukrainian lawyers, has been living in Vienna for the past eight months.
"The situation is very complex. Russia is supplying high-tech weapons to armed groups in Ukraine and that's creating problems for the civilian population. We hope this will soon be brought under control. Infrastructure is being destroyed on a daily basis," said Grischenko.
"Crimea was illegally confiscated and Russia is breaking both international law and the law of the Russian Federation," he added.
Russia denies it is aiding separatists and has accused Ukrainian forces of firing into Russia.
But Grischenko says the OSCE must stop Russian interference. "We want the OSCE, as the organisation which is responsible for the security of Europe, to regulate this conflict and stop the military interference by the Russian authorities.
We hope the scenario which played out in Georgia and Chechnya won't be repeated in the Ukraine and with pressure from international organizations the conflict will be stopped and Russia will stop interfering in the internal affairs of the Ukraine."
"Russian officials come here for press conferences. They see our protests and we know they cause them some discomfort. So we are getting a reaction," said Grischenko. The OSCE is playing an increasingly important role in the Ukraine crisis. Photo: Kim Traill