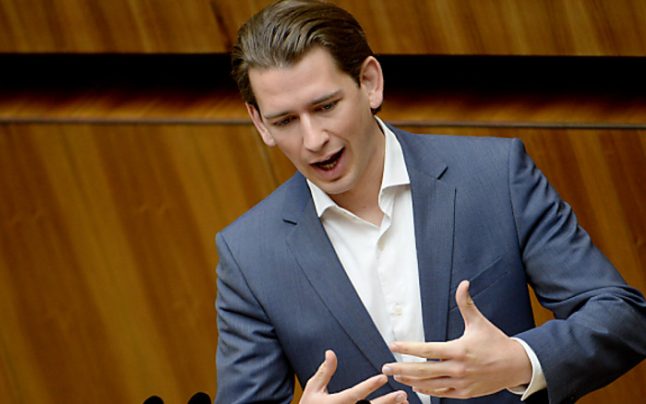 Sebastian Kurz. Photo: APA/ROLAND SCHLAGER
"We will submit a statement of facts to the prosecutor's office to examine the hate postings," said Kurz, according to a report in the daily tabloid Österreich.
Kurz's spokesman Gerald Fleischmann, confirmed to the APA press agency on Wednesday that the minister "does not want to see his site being used for such harassment."
"Discussion yes, but no baiting," Fleischmann added.
Using the applicable laws on incitement and discrimination, Kurz will submit a statement – which includes screenshots from his Facebook site – to the prosecutor, so the comments can be investigated.
Over the past few days, Kurz has appealed to both sides of the Gaza conflict to stop the violence. His comments were subsequently posted on his Facebook page.
Meabwhile Interior Minister Johanna Mikl-Leitner (ÖVP) warned against importing "conflicts from other countries to Austria".
She called on those who plan to join a demonstration about the Gaza conflict in Vienna on Sunday, organised by the Union of European-Turkish Democrats (UETD), to "remain calm".

Mikl-Leitner "strongly" condemned "tendencies in social media", saying that the borderline between violent speech and physical violence was becoming blurred.

"Our police officers will guarantee everybody's security and protect the right of freedom of speech and free assembly as usual," Mikl-Leitner said.
She added that Austria had "high standards in protecting its Israeli and Jewish facilities".